As seen on Good Morning America.Shop the Collection →

Create a Wedding GroupChoose your look, add members, and send an introduction email. We'll take care of reminding everyone of what they need.Get Started
Fit FinderFind your fit in just three minutes. We use machine learning to determine your size.Fit GuideView our size charts and learn about the differences between Slim and Modern fit.Personalized HelpGet in touch with our team and we'll make a personalized size recommendation.

A spring wedding in Buffalo, NY.

A: Ben and I met in high school and had been dating a little over 10 years! I moved to Nashville after college for a job and he followed me a few months later. After spending a few years there, we made the decision to come back to our hometown of Buffalo together so that we could be closer to family and eventually pursue Ben’s dream of opening a deli (which we just recently accomplished!) We talked about getting married when we first made the decision to move back to Buffalo but with the timeframe of waiting 1 or 2 years. Ben had been ready to plan a wedding for years before that. He had apparently already got the ring with my stepmom within months of moving back and proposed one night when were on a walk with our dogs at the lake by our house. My sister was at a restaurant in the park and got the whole thing on camera. It was simple and perfect. He also had planned a surprise party at our favorite restaurant in Buffalo afterwards with all our family and friends. I was super shocked but couldn’t have been happier!

Q: What made you choose your venue and theme?

A: The venue was an easy choice. We got married at Kleinhan’s Music Hall in Buffalo which is an iconic structure and it’s where the BPO plays. When we were in high school, we both worked for Ben’s dad’s restaurant catering weddings and other events. The most beautiful  weddings were always at Kleinhan’s and we always joked back then that if we could make it happen, we would get married there! It was truly a dream come true.

Q: A bridal party in all white? We love to see it! We'd love to know more about your experience in working with SuitShop!

A: As for the bridesmaids, Ben was a bit of a bridezilla so he knew he wanted to wear a bright blue, window pane, double breasted suit and and that he wanted his groomsmen to wear blue as well. He has legitimately had his wedding style picked out since he was 10 years old. I wanted something that worked with his vision and I usually have more minimalist style anyway so I loved the idea of white. I had always known since I was younger that I wanted my bridesmaids in suits! It felt classy and elegant while also being a little bit different. I was hoping to wear a suit myself originally, but I ended up wearing one to my shower instead and went the more traditional route of wearing a dress. Suits and blazers are my favorite part of dressing up and I thought it represented me well. I looked FOREVER for the perfect white suit. I wanted it to be classic but still have the ability to be as feminine as each of my bridesmaids wanted, plus I had to be able to order tons of different sizes. I ordered many different suits to my house to try on and right when I tried on the SuitShop suit, I knew it was the one. I sent a picture of me in our group chat and everyone was so excited. Plus, you guys seriously made the process so easy where everyone could be in charge of ordering their own suits and talking to a size consultant, etc. On top of this, I was happy they were affordable to buy because I knew all of my friends and sisters would look amazing in white suits and could re-wear them for any event after the wedding! I gave them the option of whatever hair, jewelry and makeup they wanted. Some decided to wear tank tops underneath the suits and others went shirtless and they all looked absolutely amazing. I loved both the product and the service so much that I bragged to my fiancé about how easy it was after looking at dozens of other places. He took my word for it and decided to get his groomsmen suits from SuitShop as well just because he saw how easy it was for me! Affordable, good quality and quick.

Q: We noticed a few car images in your album. Can we get the deets on that epic wedding gift?!

A: This was probably where I peaked in life so I’m likely going to give you way too much detail and I apologize in advance. Ben’s love language is giving gifts and also receiving them so I knew I had to do something absolutely epic for our wedding. We had been talking about this day for so long and he usually beats me in the gift category so I started thinking about his gift before we were even engaged. Ben grew up with his dad and family driving older BMWs. They were all kind of car nerds and appreciated the older ones specifically. Ben’s dad drove a 2002 forest green 5 series BMW sedan with tan interior when we were in high school. It was an ongoing joke that I was allowed to drive it and Ben wasn’t because it was a stick shift car and he didn’t know how. In college, his dad got really sick with cancer suddenly and wasn’t able to drive anymore. He asked me to teach Ben how to drive stick shift so that Ben could have the car when he passed away. A couple months after Ben’s dad passed that year, a truck totaled the car during a snow storm and drove away. It was heartbreaking because I knew how much the car meant to him. When I was brainstorming gift ideas, I knew it was ridiculous but I was thinking how epic it would be if I could get him a station wagon but in the same color as his dad’s car, just to pay homage to that part of his life and also because Ben randomly is obsessed with station wagons because he thinks they’re perfect “dad cars”  which if you know Ben, his whole life goal is to be a dad. My cousin Marty works in the car industry and I told him about my idea. I had SUCH specific specs that I told him I assumed were unrealistic: BMW, station wagon, early 2000s, stick shift, green exterior, tan interior, etc. Marty got right to work and found me a great car literally within a week. It was a black automatic BMW station wagon but I knew Ben would love the idea behind it. We kept it a secret for over a year when one day about 3months before the wedding, Marty sent me a link to a car that he found being sold in Ohio. It was THE car. Literally fit every spec I had and I started crying the minute I opened the link. It was identical to Ben’s dads car but a station wagon version. I called my cousin immediately and told him it was perfect but that I wouldn’t get my hopes up. He drove to Ohio that weekend to make an offer and drove the car back home. I owe him pretty much everything for making that happen for us (he also officiated our wedding so he’s pretty much the best cousin ever!) We kept it a secret because I was determined to give Ben the car on our wedding day with a bow on it. The last few months of wedding planning were hard because I couldn’t think of anything else besides knowing that I get to watch his reaction to seeing the car, and I will say it was all 1000% worth it. That morning, we did our first look and Ben gave me a beautiful necklace and I could tell he was confused that I “forgot” his gift. We walked back up the stairs to the parking lot to get on our party bus and head to the venue, and I had the car parked facing the stairs. Our groomsmen and bridesmaids were standing in front of it to block Ben’s view and I asked them to step aside and told Ben to look. I’ve never seen Ben in such shock and it was amazing for our whole bridal party to watch him get the gift! They all did a good idea of keeping it a secret as well. He was speechless and definitely shed a few tears. It was hard to get him out of the drivers seat to get to the ceremony haha!

Q: Any advice for brides/grooms to be?

A: I’m no expert at wedding planning and would have probably lost my mind without my planner- so my first piece of advice would be to hire one! Daulton (@therefinedhost) made it worth every Penny, not only because of the things she asked that I wouldn’t have thought of, but because of the ways she found to save us money and keep us within budget. Just as important is finding a photographer you vibe with. Get to know them well before the wedding and buy them dinner or drinks! Our photographer was everythinggggg and went out of her way to make our day so much better and prioritize the things we wanted because she knew us so well. She was pretty much another bridesmaid in my book and I had only met her the day we hired her!

My other most important piece of advice is not to worry about anyone but you and your partner. Wedding planning can be stressful if you’re trying to make everyone happy. But you only get to plan this specific day once and you want to look back and have as little regrets as possible. Once I let go of what other people thought or hurting other people’s feelings and really concentrated on the things Ben and I wanted (even if they were unusual)- the process became so much easier and I was honestly just looking forward to it.

We had our whole wedding party use the suit shop and we could not have been happier with both the customer service and the suits themselves! 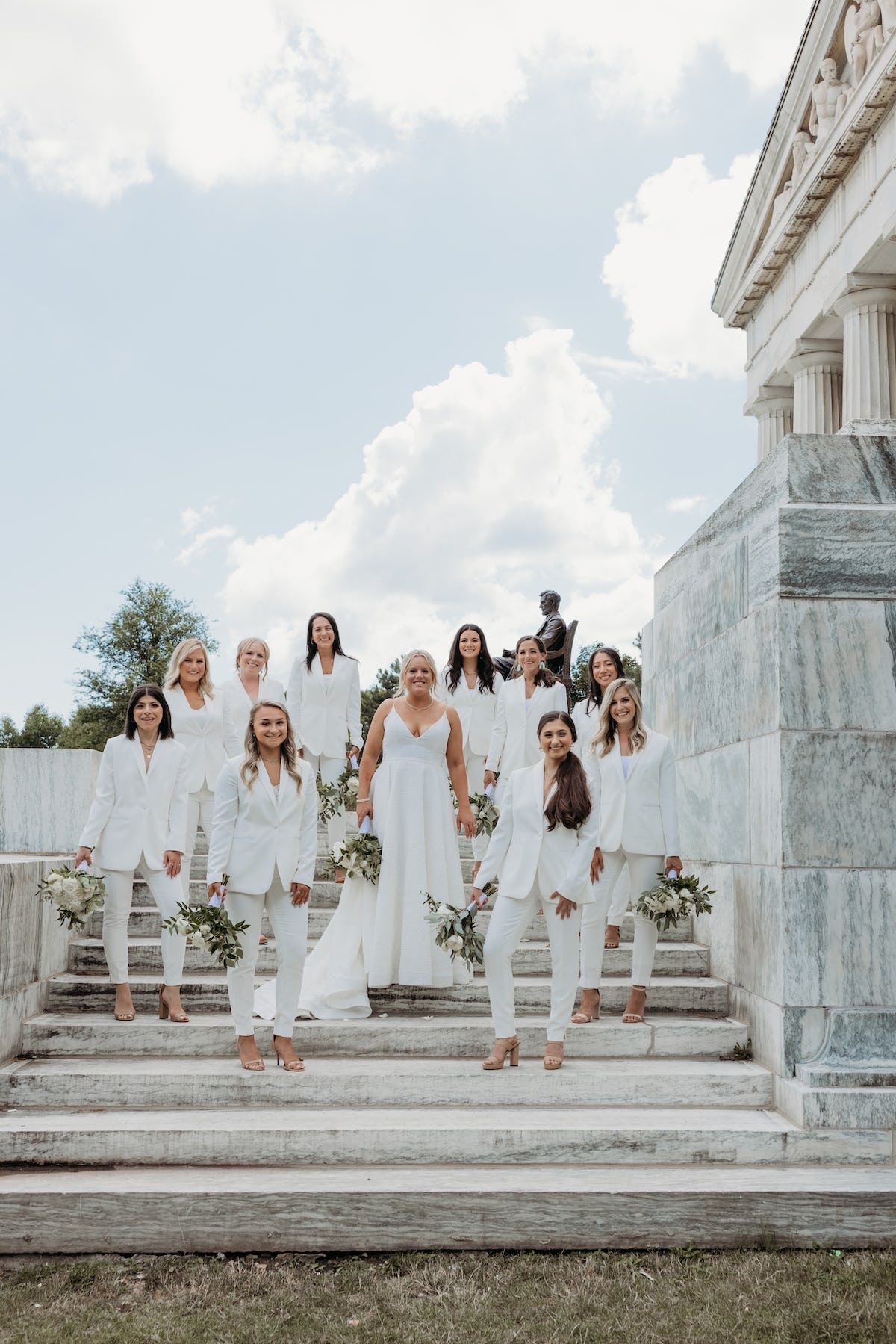 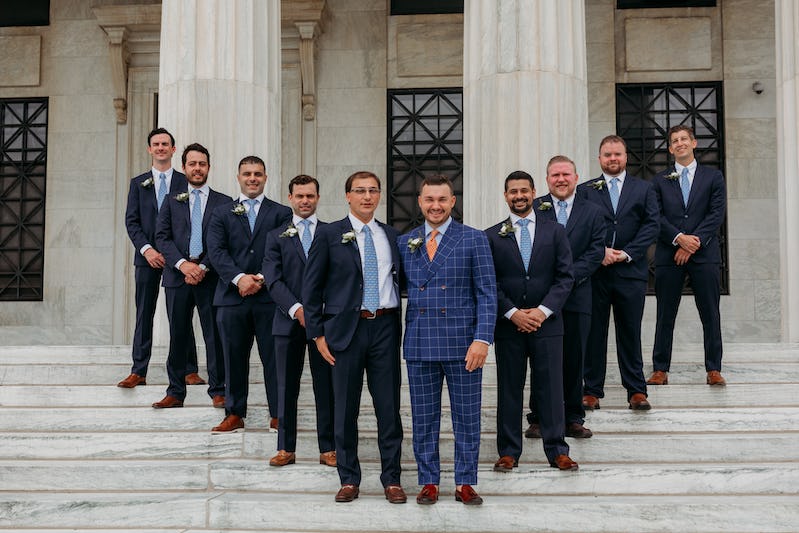 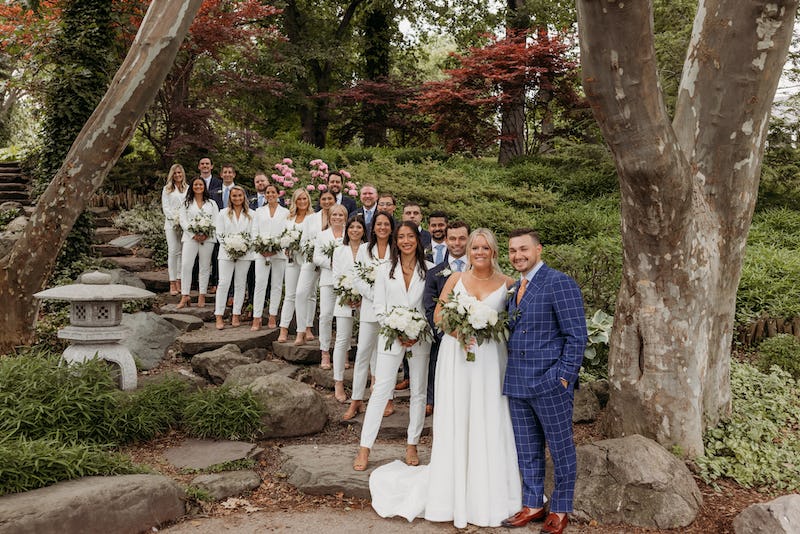 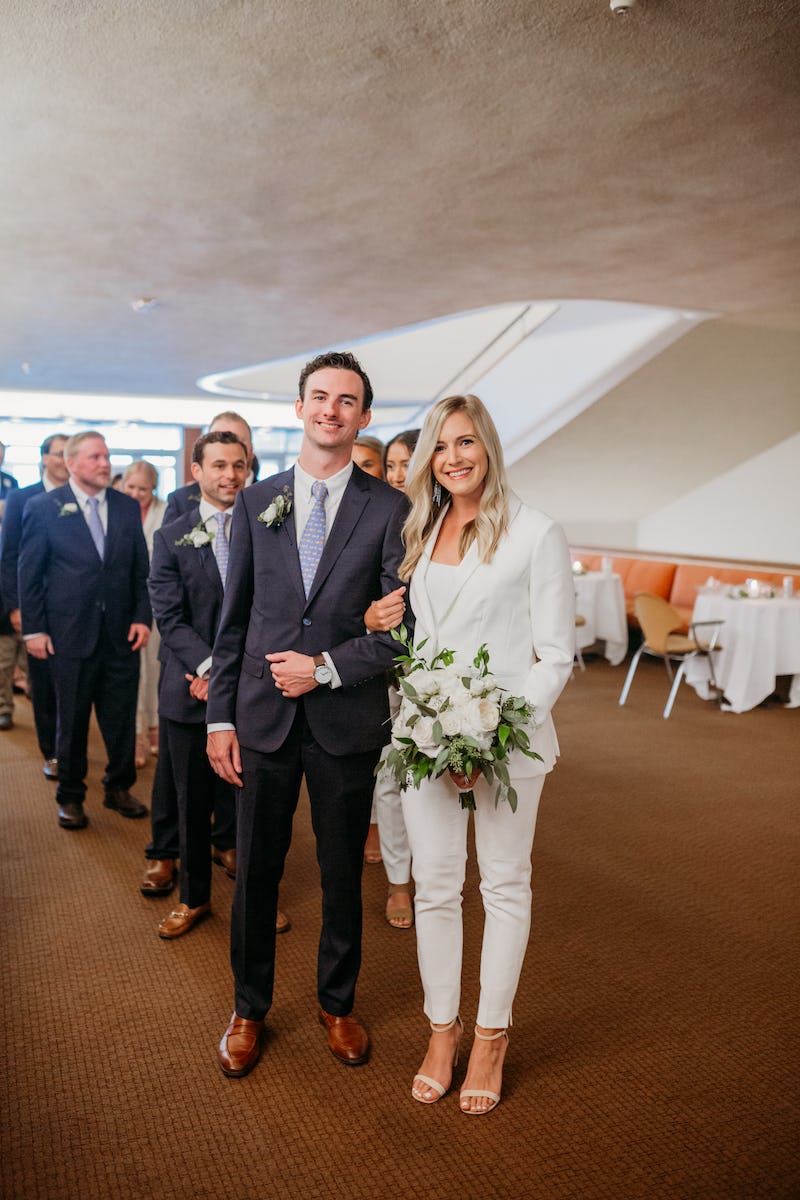 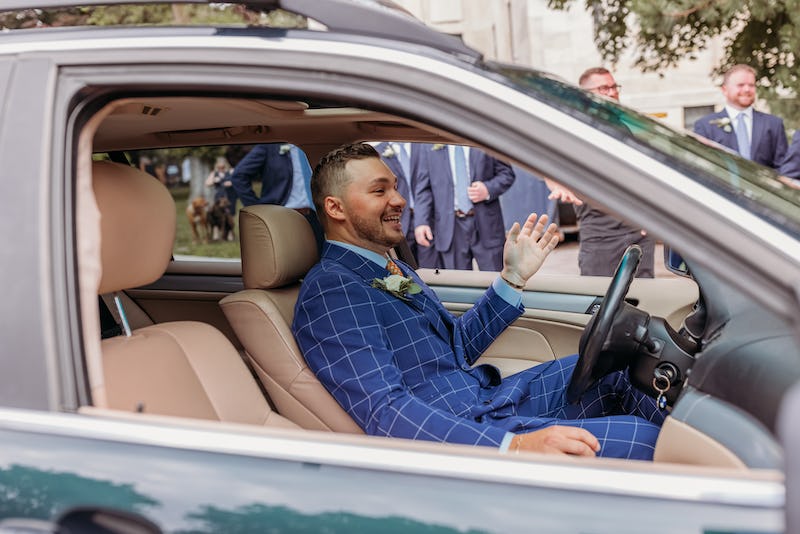 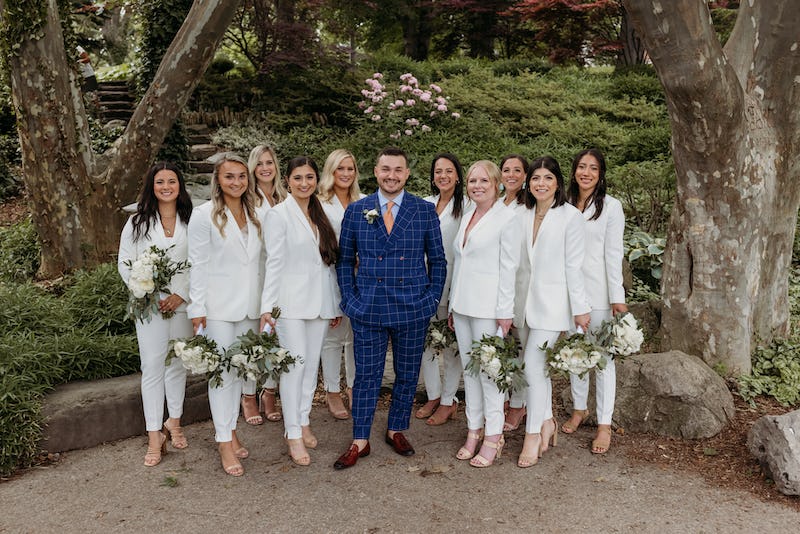 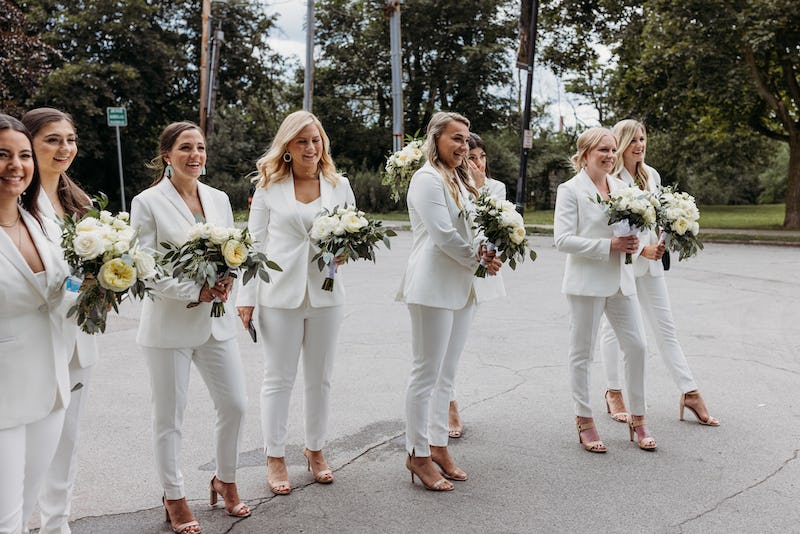 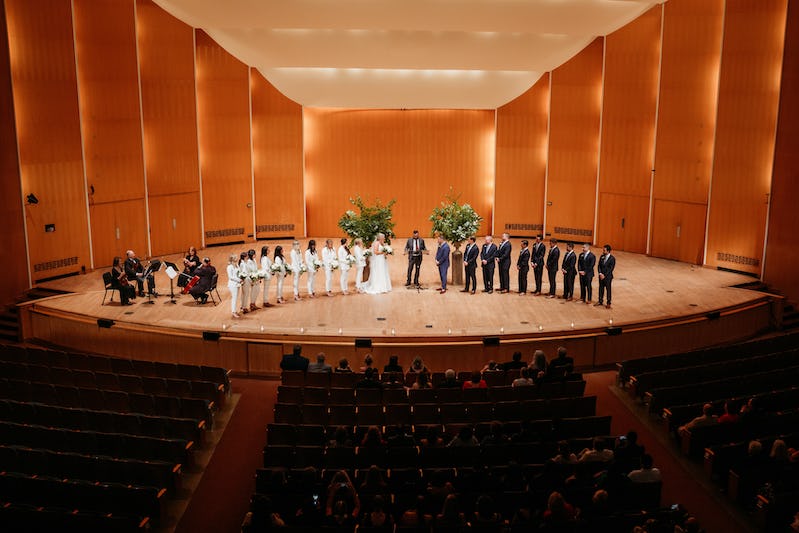