Create a Wedding GroupChoose your look, add members, and send an introduction email. We'll take care of reminding everyone of what they need.Get Started
Fit FinderFind your fit in just three minutes. We use machine learning to determine your size.Fit GuideView our size charts and learn about the differences between Slim and Modern fit.Personalized HelpGet in touch with our team and we'll make a personalized size recommendation.
Style-Guide: What to Wear to S...The Perfect Fit: Sally Osborne... 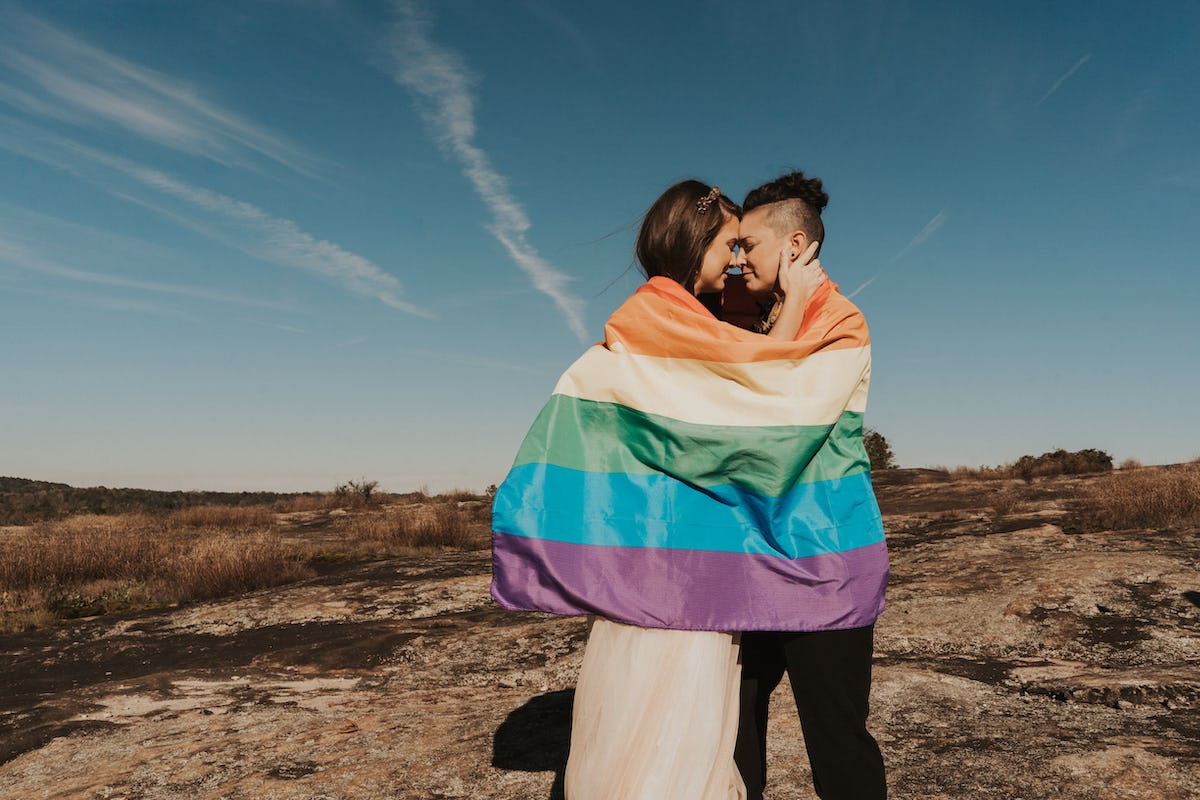 Inclusivity isn’t just a buzzword. It’s diversity in action that affects real people. It’s making sure that everyone feels included, accepted, celebrated, and affirmed. As the LGBTQ+ community and our allies kick off Pride month, what better a time to dive into LGBTQ+ inclusivity than now? 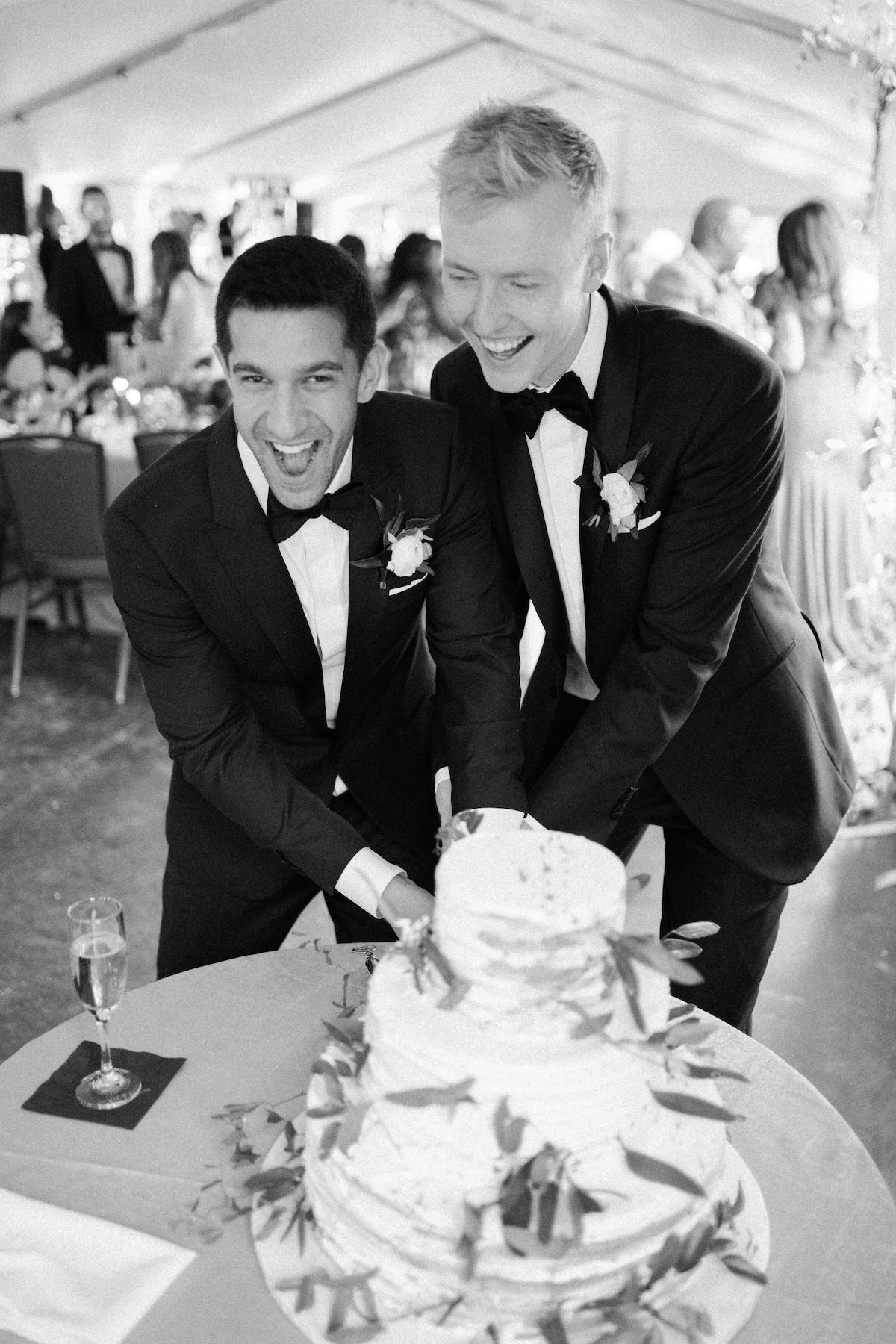 My wife, Kirsten, and I didn’t feel included, much less accepted, celebrated, or affirmed by the wedding or fashion industries when we were planning our own wedding, a time that should have been filled with excitement and heartwarming well wishes. We were turned down by vendors, laughed at by the public when my wife wrote about our struggles in our city newspaper, insulted with ignorant questions by people we knew, misgendered by salespeople, and excluded in the wedding media as if LGBTQ+ weddings were too polarizing to even discuss or display in their ad-funded pages.  When it came to shopping for my own suit as a masculine-leaning nonbinary person assigned female at birth, two words come to mind to describe the experience: isolating and disheartening.

Maybe not so typical of how most people react to adversity, our response was to change the wedding industry for our community. What resulted was our creation of Equally Wed, an online LGBTQ+ wedding magazine, and Equally Wed Pro, an educational training and certification program for wedding professionals to learn how to be authentically LGBTQ+ inclusive. We started in 2010, and we’re going strong 12 years later.

As we celebrate seven years with full marriage equality in the United States, more people are opening their hearts–and their businesses' doors–to the LGBTQ+ community. As this welcoming continues, it’s important to take note of the level at which businesses are saying yes to equality.

While leading Equally Wed for the past 12 years, I’ve found that there are varying degrees to which inclusivity and acceptance are happening, from “willing to take money from gay people” all the way to celebrating the full spectrum of the LGBTQ+ community. Being LGBTQ+ inclusive doesn’t just mean being kind to everyone. It requires more work to be intentionally welcoming with your words and actions, even if you also identify as LGBTQ+. 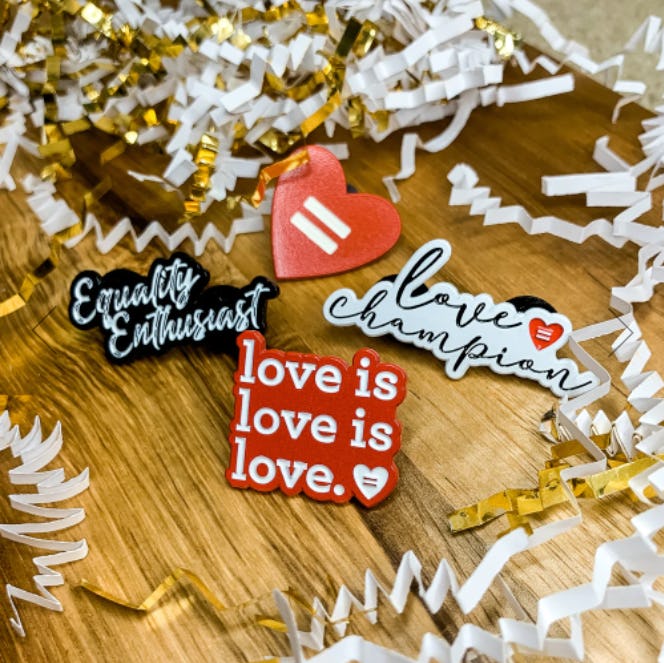 For someone to be authentically LGBTQ+ inclusive, they must take, at a minimum, the following measures to embrace the LGBTQ+ community.

1. Use gender-neutral language until you know differently. Gender identity can never be assumed. Friends, folks, and y’all are all great substitutes for ladies, guys, or girls. If you’re in the wedding or fashion industry, consider moving away from the gendered terms such as bride and groom, menswear, women’s cut, and other cisnormative language. Try terms like couple, marrier, sporty, curvy, athletic, slim, all bodies, all genders, or some other word that focuses on anything but specific adjectives or attributes that society has taught us are gendered.

2. Share your pronouns whenever possible, and ask others to tell you theirs. Put them in your signature, on your nametags, and in your bios. And though you might have been told that these are “preferred pronouns,” that’s not accurate. The word “preferred” implies choice, and we don’t choose our gender identity. One phrase I like is, “What pronouns do you use?” or “What are your pronouns?” Even better, you can lead with your own. For example, introduce yourself by saying, “Hi, my name is Maria, and I use she/they pronouns. What pronouns do you use?” 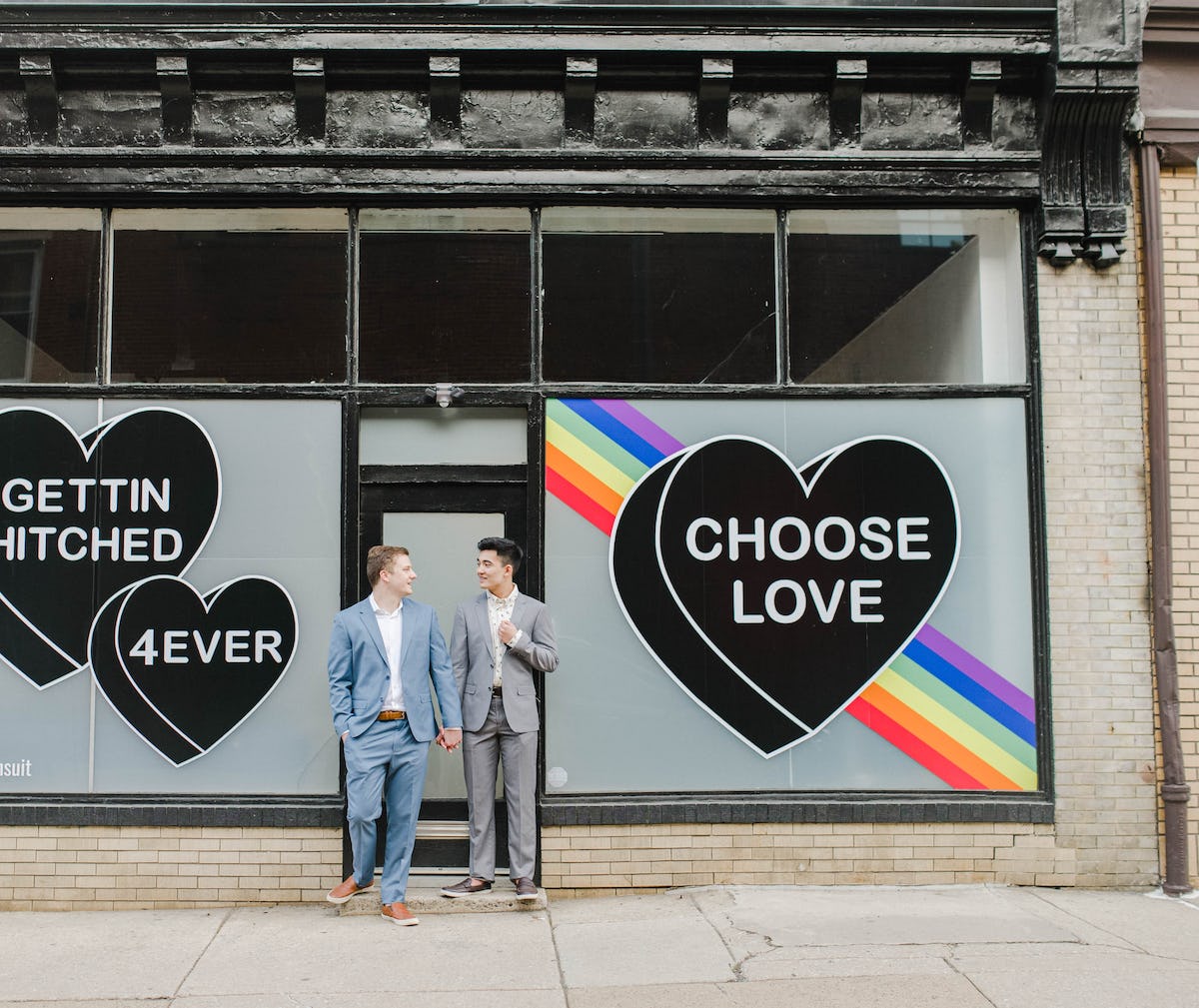 3. Own or work for a business? No matter what you’re selling or promoting, show a variety of couples in your business’ imagery, not just cishet couples. (Cishet means cisgender and heterosexual. Cisgender is the opposite of transgender. Cisgender people identify with the gender they were assigned at birth.) I highly recommend incorporating diversity in more ways than just sexual orientation and gender identity. Show people of all races, ethnicities, body shapes and sizes, and physical abilities.

4. Don’t tokenize LGBTQ+ people. If you’re going to do a styled shoot, use actual LGBTQ+ people. If you’re going to educate on LGBTQ+ inclusivity, bring in an actual LGBTQ+ person who’s trained in DEI to do the educating. It’s inauthentic and insulting to our community to pretend to be something that you’re not or to elevate straight voices and faces over LGBTQ+ voices and faces. 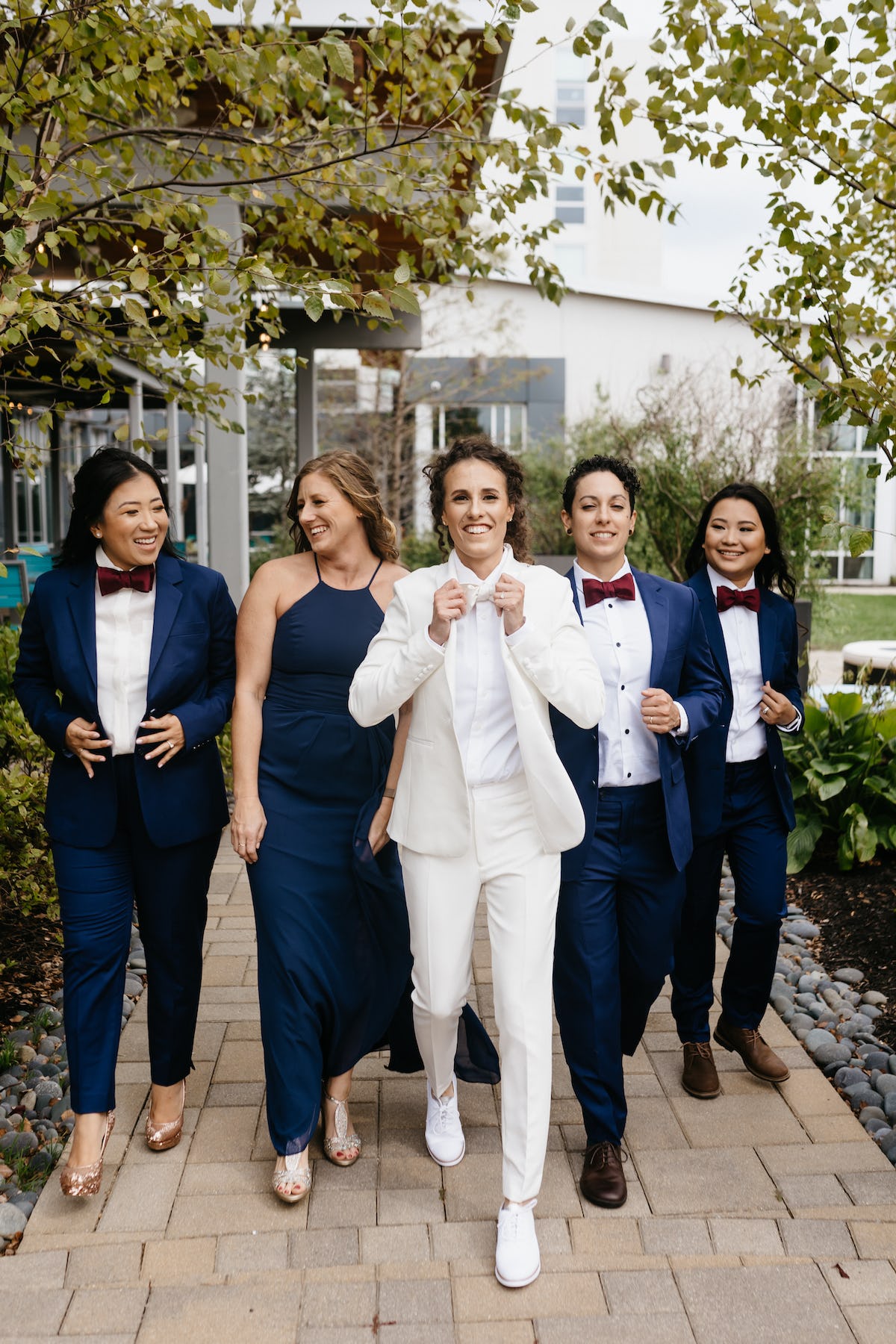 5. Celebrate the LGBTQ+ community year-round, not just during Pride month. Corporations and individuals alike who wave our flag from June 1 to June 30 but don’t show up for us at any other time are more harmful to our community than the people who don’t hide their bigotry.

6. Speak up for LGBTQ+ equality in private conversations. If someone makes a joke about LGBTQ+ people or misgenders someone who is publicly out with their gender identity, say something. Activism comes in many forms, and it’s important to protect a level of comfort for yourself, but it’s also important to push your own boundaries in order to grow as a global citizen. 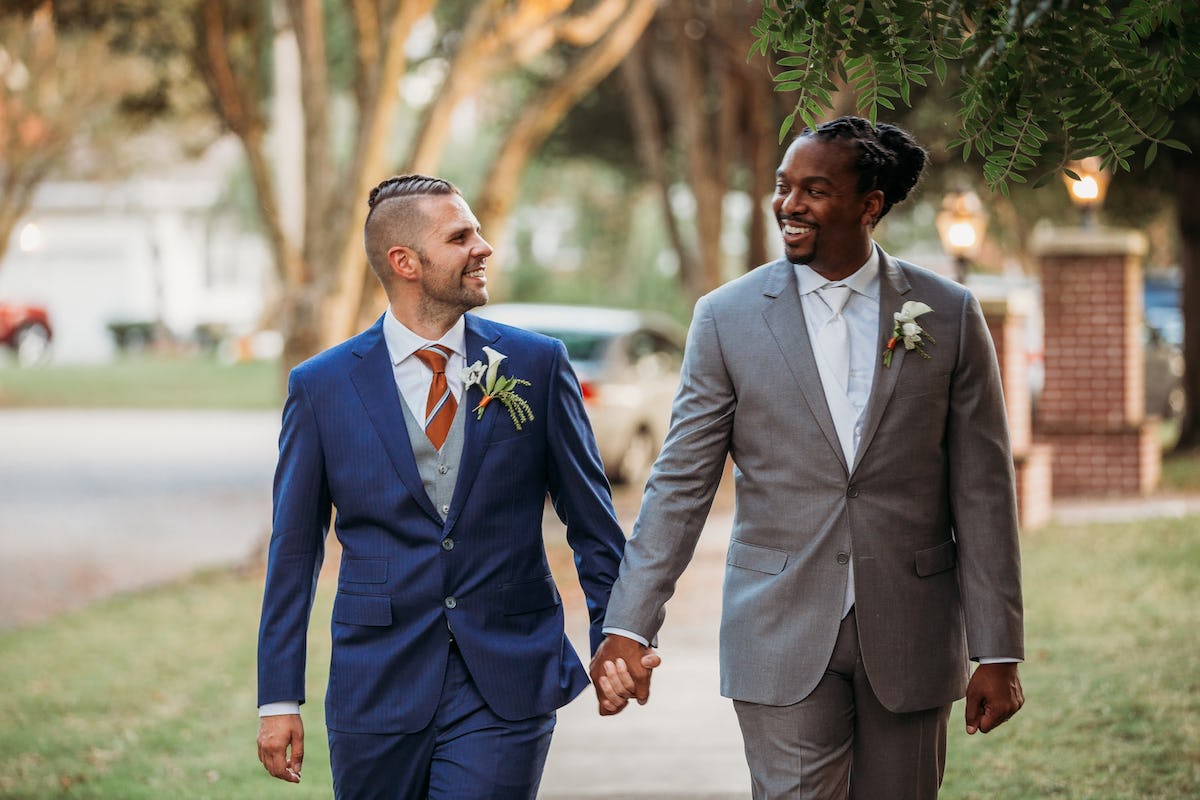 7. Do not do business with anti-LGBTQ+ businesses. Educate yourself on how companies in your area are treating the LGBTQ+ community. Join forums, support your local LGBTQ+ organizations, and reach out to LGBTQ+ people to find out what’s happening.

8. Understand that there are differences between LGBTQ+ weddings and straight weddings, such as double proposals and inherent challenges that LGBTQ+ couples face in society and with their families. Yes, love is love. We all deserve to marry the person we love. But it’s also okay to recognize that there are inherent differences and celebrate those differences. 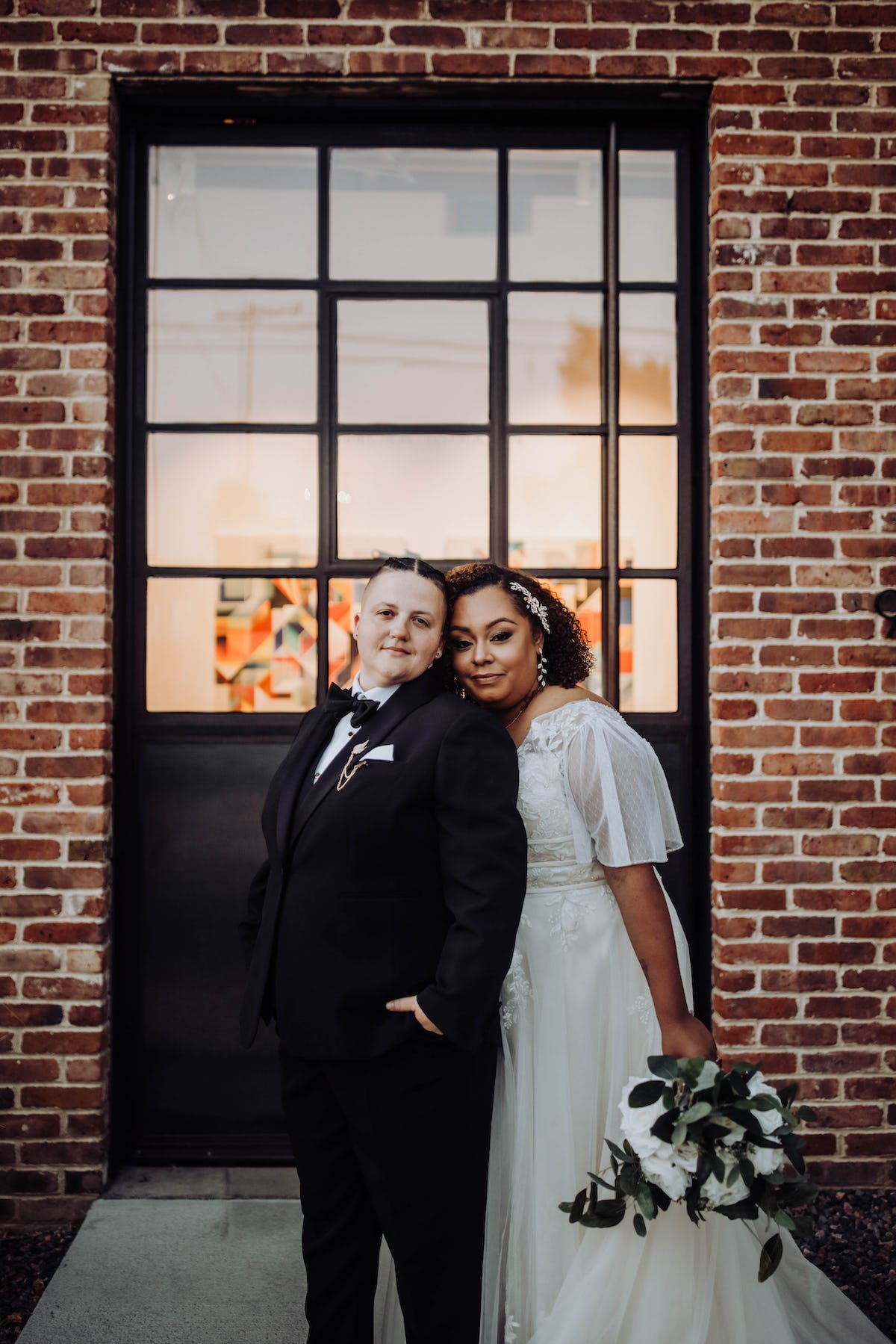 9. Give yourself grace and time to learn about the LGBTQ+ community. Most of us weren’t taught inclusivity during childhood beyond “be kind to everyone.” So don’t judge yourself for not knowing what you didn’t know yesterday, and be open to continuing to learn–because it’s a journey.

10. Do the work. It takes sincere effort to be fully and authentically LGBTQ+ inclusive. To support our community in accessing LGBTQ+ inclusive wedding pros when planning their own weddings and to help the wedding industry lead with love, my wife and I built an on-demand digital course that trains wedding pros and venue owners to be LGBTQ+ inclusive on every level of their business. I invite you to check us out at equallywedpro.com. Other resources I recommend outside of the wedding industry include The Trevor Project, GLAAD, and PFLAG. 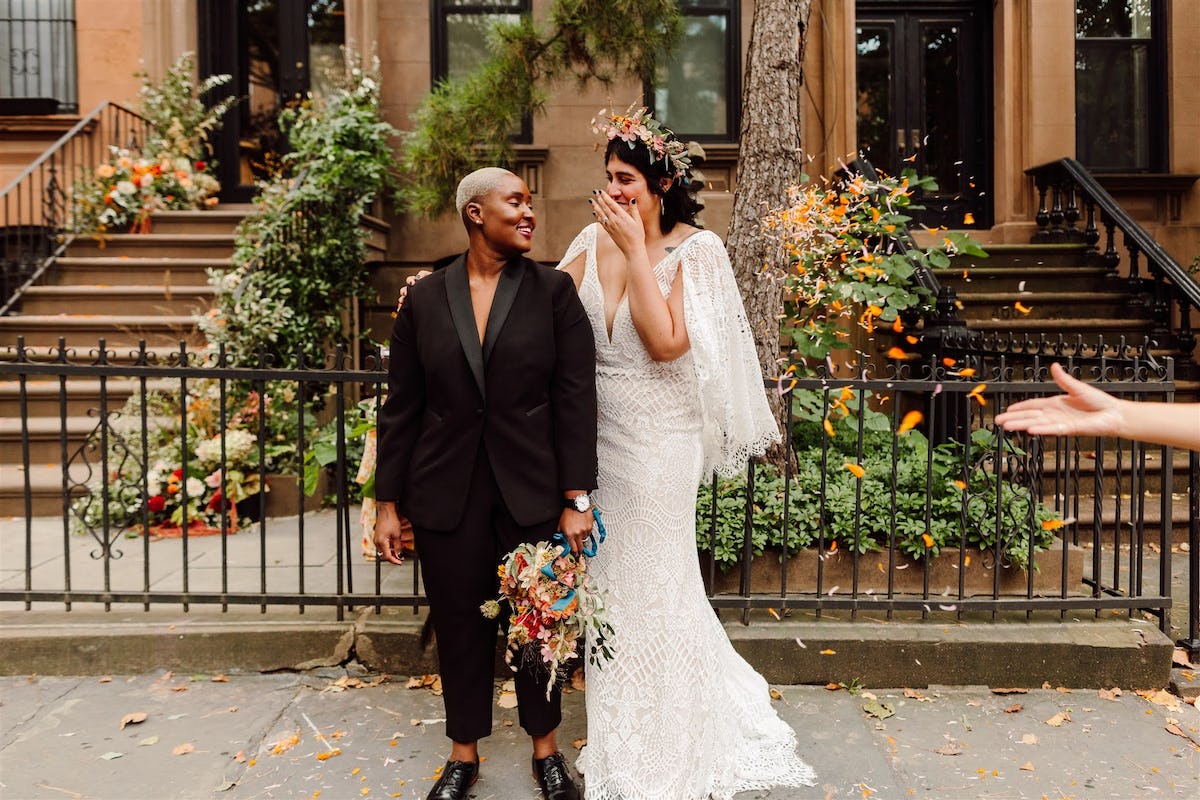 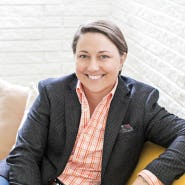 A professional graphic designer, web developer, and entrepreneur with more than 20 years of experience, Maria (Mo) Palladino (she/they) has been immersed in weddings and events for 13 years, and is internationally recognized for being instrumental in bringing LGBTQ+ weddings to the forefront of the wedding industry. They have been profiled in The New York Times, interviewed by various publications and podcasts such as Atlanta Magazine, The New York Times, AARP, The Wedding Biz, and more and been interviewed as an in-studio guest on CNN. With Maria’s design and development, EquallyWed.com was a 2018 Webby Award nominee. They are a sought-after speaker who provides inspiration and education to allies and the LGBTQ+ community alike.